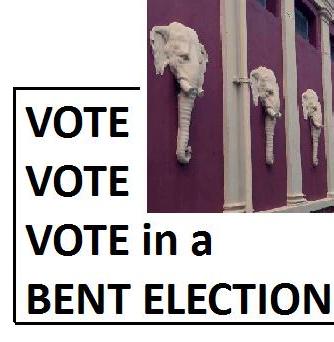 With the General Council remaining silent over the allegations of irregularities in the current presidential election, it looks like the idea of a valid and trusted election has been dumped in favour of a quiet life. Can the Adyar Theosophical Society really continue with a “let’s pretend it isn’t happening” attitude in the executive governing body? The emergence of doubts over the integrity of the electoral process has revealed a Society with a governing body that is not only incapable of speaking to the members, but also can’t even assert its authority as the governing body.

For decades, Radha Burnier told the timid and cowering General Council what it could and couldn't do, but since her death the Council has been exposed as a management incapable of managing, thus leaving the Theosophical Society dangerously vulnerable to predators. The General Council has neither a strategy to deal with the issues facing the Society, nor the will to govern. On current form, it will stand there in silence while the members are cheated out of their Society. Expecting members to participate in, and accept the result of, a suspect election reaches new heights of betrayal. 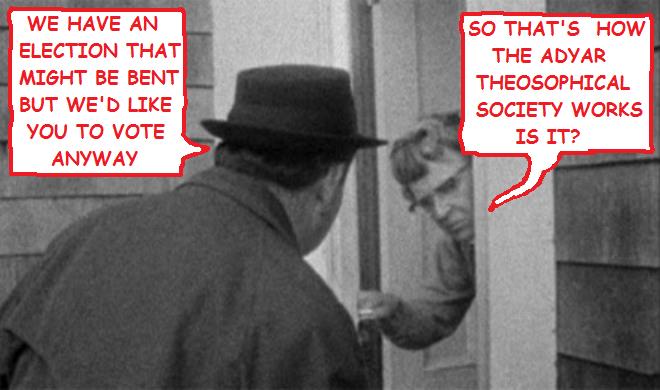 Neither presidential candidate has spoken up regarding this vitally important issue of election irregularities and it must now be assumed that they are meekly complying with the General Council's need for a quiet life. Perhaps their compliance to the General Council’s wishes contributed to their nomination and they certainly haven’t disappointed their masters. Any senior official not making a stand on issues now, is certainly not going to be capable of making a stand on anything after the election.

The lack of an effective leadership and the power struggle between the vested interests will be a major contributor to the break-up of the Society. Former members will look back on the General Council's failure to administer a credible election as a marker in the history of the demise, and as a lost vital opportunity for the management to assert its authority. Members have been badly let down by a General Council that has shunned responsibility and hides itself away.