as a democratic body.

With allegations of electoral irregularities ignored and

discussion of issues suppressed, it is now reasonable to

question the democratic credentials of the General Council. 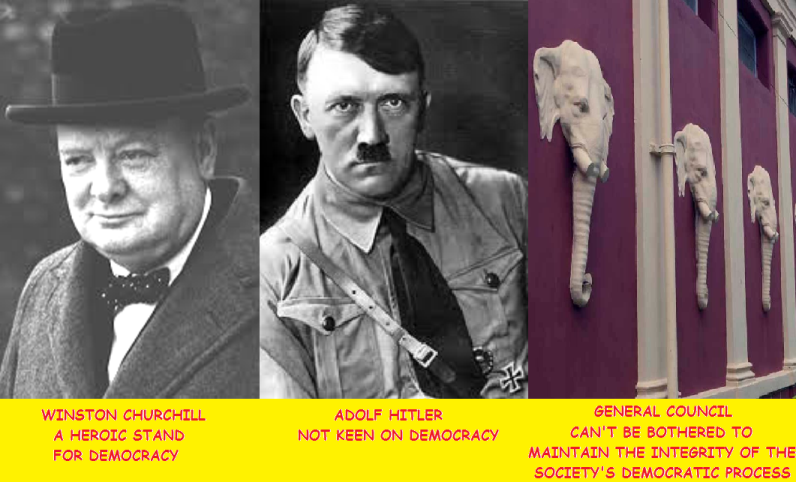 The slightest hint that an electoral process is being undermined and the leadership of most reputable organisations would do double somersaults backwards to sort it out, followed by sworn affidavits over the 1956 Beezer Annual (or equivalent) to assure everyone that everything was now correct and above board. If irregularities were found, the people responsible would be exposed and called to account. Any election found to be undermined would be re-run under stricter supervision to ensure that the resulting elected official had full credibility.

The governing General Council of the Adyar Theosophical Society sees things differently and prefers to ignore any allegations of corruption or irregularities in the electoral process. The importance of the integrity of the democratic process comes a very poor second behind the need for a quiet life, and a belief that it is better to tolerate a bent organisation to maintain unity. No heroic stand for democracy here but there again, the General Council has proved that it can’t make a stand on anything.

The question now arises as to how many members of the General Council are concerned that the Adyar Theosophical Society is actually a democratic organisation. Look at the track record of the General Council with its strange internal nominations process, current secrecy and the 2008 attempt to cheat the members out of their voting rights. There are some impressive anti-democratic credentials displayed here and some may say strong fascist leanings.

From the course of events since Radha Burnier’s death, it has become clear however that the General Council does not actually control the Theosophical Society, and that the power lies with vested interests elsewhere.  Although there may be some General Council members with strong fascist leanings, it is more likely that the Council consists of ineffectives, and stooges of those with power. The General Council hoped to conceal its true powerless situation by imposing a news blackout on all Society affairs (actually that’s a bit fascist) thus allowing a quiet transition of power to the new controllers. The strategy isn’t working as events are now overtaking the paralysed General Council, with publicised allegations of irregularities in the presidential election, and news of the obvious consolidation of family control at the Adyar Headquarters. It is becoming clear that the Adyar Theosophical Society does not pass muster as a democratic organisation and without fundamental reform, the break-up is inevitable.

The Adyar Theosophical Society has

representation in the following countries

The Adyar Theosophical Society also has the following

​The Council of the European Federation of National Societies