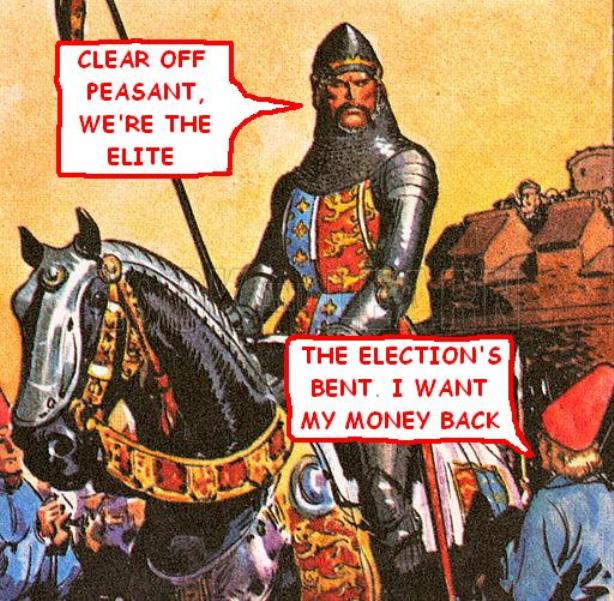 This election has little to do with what the paying members

want, as the silence and lack of information show.

It’s nice and cosy for the Adyar ruling elite with its power base supported by the members aka “BALLAST”,  and its right to run Adyar like a feudal barony. The one thing that the Adyar rulers certainly don’t want is some outside international president type person coming in and interfering. The election of a new president therefore needs to be well managed.

But there may be an answer to this problem in the form of a president who is planning an itinerant presidency, and who is only going to drop in on Adyar every now and then for a cup of tea. This has advantages for both president and Adyar ruling elite. Firstly, the president will not have to bother about the situation at Adyar regarding staff treatment and the actual control of the Adyar Estate, and secondly the Adyar ruling elite can just get on with running their feudal power base without let or hindrance.

Anybody opposing this idea can always have their right to vote taken away, as has clearly been happening in the Indian Section. After all, the purpose of the members is to provide funding for the Adyar power base and not to participate in the running of the Theosophical Society. To the elite, the affairs of the Society are of no consequence beyond the walls of the Adyar Estate unless they threaten its power base. The General Council ensure that the elite has no need to worry, and that the members are the losers.

The chain of the command in the Society works like this; the orders come from the Adyar ruling elite, which constitutes the decision making executive.  These orders are read out to the General Council who implement compliant action within the broader Society. If the orders are detrimental to the integrity of the General Council then a rule of silence is imposed, thus excluding paying members from any say in the running of their own organisation. The General Council, by the own compliance, also have no say in the running of an organisation which they are supposed to be running.

Tim Boyd was nominated by the Indian General Secretary and there has been discontent over this in the Indian Section, which the ruling elite tried to crush in order to maintain their grip on power. It is Indian members themselves who have mounted resistance while the General Council obediently stood back and kept quiet. “Leader Command and We Obey” appears to be the mantra of the General Council.

Clearly Tim Boyd is the Adyar elite’s choice as a compliant president who won’t rock the Adyar boat. The General council have been told this and are doing their best to ensure that the ruling elite gets what it wants. They are prepared to suppress information and turn a blind eye to election irregularities in order to appease their Adyar masters.