By its silence policy and failure to clear up doubts

about the result of the 2014 presidential election,

the leadership has declared itself unaccountable.

Does the General Council still exist?

The silent candidate has slotted in

quite nicely as the silent president. 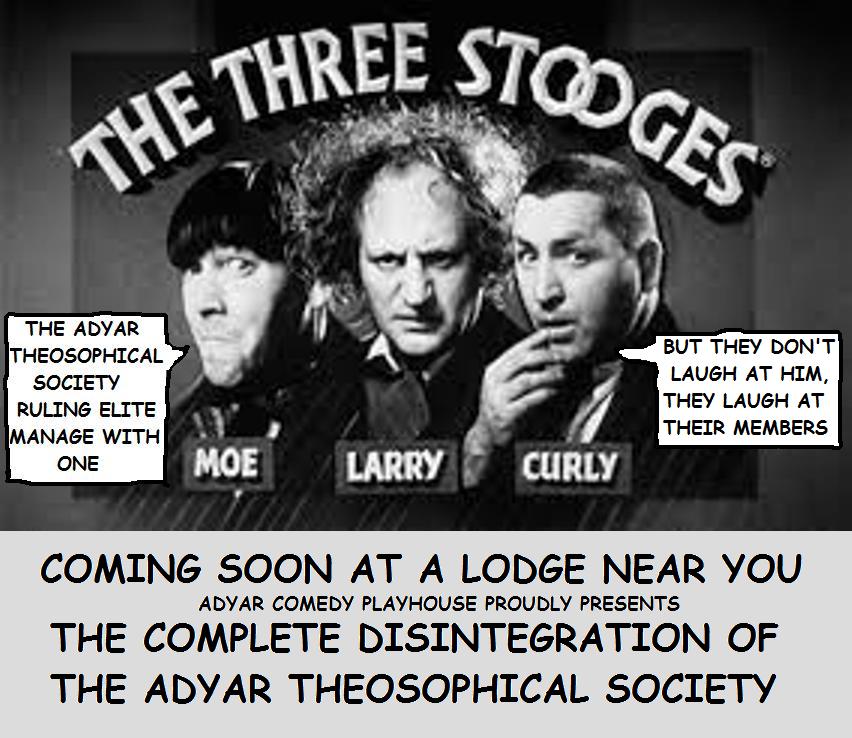 Leadership has made itself so remote from the

membership that the Adyar Theosophical Society

no longer functions as an organisation of members

The members don't get told anything, making it brutally clear to even the most devout Adyar loyalists that their needs are no longer a concern of the Adyar Theosophical Society ruling elite, who are now pursuing an agenda which can only benefit them, and preserve their power base. Failure to deal with doubts over the 2014 presidential election has turned the Society from a democratic organisation of members into a multi-level marketing business ruled by an unaccountable conclave of bosses, sitting in splendid isolation at the top of the pyramid. Shut up and send us your money would now make an appropriate motto.

The arrival in Adyar of Mr Don't mind me, I'm only the president, followed by his Olympic gold medal cringing performance, has hardly reassured people that the Society has a future which the leadership are prepared to share with the rapidly diminishing number of members. Was it his idea to go to Adyar as the result was announced, or was he summoned by his bosses? He certainly didn't travel there in the interests of the members that he is supposed to represent. As usual, the General Council looks on, paralysed by fear.

Breaking away from Adyar is now being discussed at lodges all over the world, while the ruling elite take the members for granted as a source of income. There is some sentimental attachment to retaining the Adyar Headquarters but many now regard it as a costly burden for which members get nothing in return. It is now clear from the leadership's indifference to the members, and the Vice President M P Singhal's “BALLAST”  insult, that the current membership are no longer required except as income, and that the leadership sees the future of the Society as much smaller closed order in which an esoteric inner circle are financed by those prepared to pay money to support something that is not intended to bring them any benefit.

Leaving the Adyar headquarters to justify receiving support or to close, and the evolution of the Society into an alliance of independent groups with no controlling body would enable Theosophy to move forward without having to support a manipulative power elite.